What kind of impact can mobile money have in developing countries such as Haiti? Can it improve financial inclusion and foster economic development? We learn from Finca Haiti's journey through the introduction of mobile money to its clients: what motivated it, how they have been able to increase adoption, and what the benefits are to Haitians and their families.

The Artibonite Valley outside of Saint-Marc in Haiti is peaceful, lush and humid. It’s a stark contrast to the colourful and frenetic streets of Port-au-Prince a few hours to the south.  Instead of traffic jams, “tap-taps” – modified pickups that act as public transport – are taking workers to fields to prepare for new crops of beans, corn, and rice.    Farms cover this area, as they do much of Haiti, and thus provide a good setting for how farming, finance, and technology can intersect to improve livelihoods. 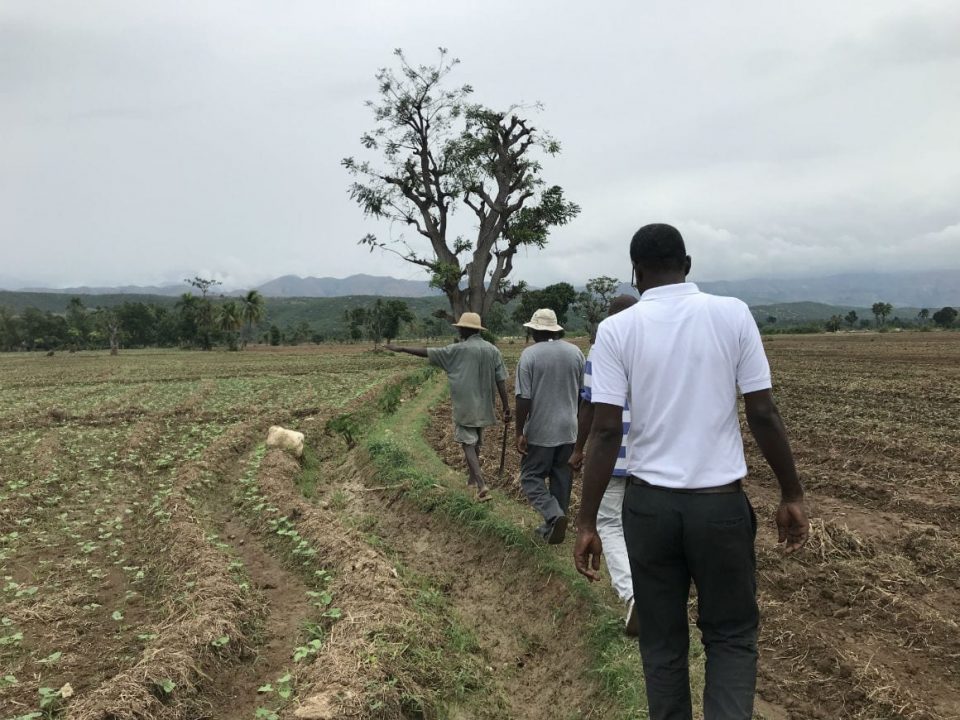 A farmer showing us his fields in the Artibonite Valley in Haiti.

Given Haiti’s primarily agricultural economy, its government has come up with a plan to reduce poverty and promote economic growth through sustainable livelihoods and income generation in rural areas, often through small-hold farmers.  Some of these efforts revolve around technical assistance such as crop diversification (as we saw first-hand near St Marc, see video here).   But one of the biggest challenges is “a chronic lack of financing” to take advantage of these promising opportunities.  By making credit more accessible, Haitians would be able to expand their income and their family businesses, including farms and the services that surround them.

What’s good about challenging environments is that they often lend themselves to unique and innovative solutions that have not necessarily made it to more developed countries.   In Haiti, a type of finance through mobile phone has been taking hold and it is available to almost everyone as mobile phones have become affordable and essential even to the worlds’ poorest citizens. And given that most of those citizens don’t have access to traditional banks, mobile money is becoming vital to advancing financial inclusion.

When we think of vulnerabilities for people in Haiti, it drums up scenes of earthquakes and hurricanes – with over 90% of the population at risk of natural disasters.    However, these events pass, and people with low incomes have to live much in the present moment. According to the latest household survey, 59% of Haitians are living under the national poverty line. For everyday Haitians, personal safety is top of mind compared to natural disasters.   Theft, sexual violence, and political upheaval are continuous concerns. Carrying cash for personal purchases, and more so, the larger amounts required for your business can be risky.  Banking clients are commonly followed by assailants on motorcycle and robbed in less public areas. Shootings during these incidents are not uncommon.

Another challenge is logistical.  Those living in the city face gridlocked traffic, where a 2-kilometer trip can take over an hour.  For those working on farms, public transport may be infrequent and there may be long walking distances to boarding points.   These logistical issues eat into valuable income-earning time which have a significant effect on already low incomes, or the ability to otherwise support a family. FINCA, one of Deetken Impact’s investments in Haiti, has come up with a unique solution to overcome some of these issues.

FINCA Haiti is a microfinance institution founded back in 1989, which currently has eight branches that serve over 45,000 customers – 90% of whom are women.  They provide the majority of micro-loans through the village banking model, where a group of individuals come together and support each other while growing their business, and the group guarantees the individuals’ loans. This model is very important especially for women since it is often they who are denied credit. As Leah Miller, Manager of Donor Engagement at FINCA International, noted after a recent visit to Haiti: “It’s very important for FINCA to support women because they are the poorest of the poor due to lack of opportunities and the barriers that they face, but they are the ones that put more of the proceeds of their business back into their families and they become such good examples and role models to their children”.

Typically, microfinance customers like FINCA’s have relatively frequent touchpoints with their lender.  They go through multiple steps to qualify for their loan, they have meetings with their lending groups, have a branch visit for their loan disbursement, and also need to visit a branch to make their loan payments.  These movements take time out of their productive day, put them in the precarious situations during travel, and more so, it puts them in danger when they are transporting, receiving or paying cash.

During disbursement, they either receive a cheque, which they will have to cash at a bank, or they receive cash that needs to be carried as a lump sum from FINCA to their home, business, or immediately to a supplier to obtain goods.  As many low-income Haitians are not part of the formal economy, they do not qualify for an account at a bank to deposit these funds so any remaining cash needs to be kept on hand.  This movement and possession of cash keeps people in a vulnerable state. Similarly, for payments made on loans, microfinance clients need to travel and carry cash.   This cash needs to be accumulated and paid to FINCA directly for individual loans, or assembled with fellow group members for their consolidated payment to FINCA.

Finding a way to remove cash from the equation could allow clients to stay productive during their day, avoid lengthy travel, and remove the risks with carrying cash.  This is where technologies such as digital finance can help.

FINCA has been leveraging the use of technology in the countries it operates for over a decade. More recently, the widespread use of mobile phones even among poor countries has made it possible to use them to expand access to financial services. In 2013, FINCA Haiti partnered with Digicel, the largest telecom provider in the country, to offer clients the option to make their loan repayments via mobile phone – a service they called Moncash. MonCash is a digital wallet that can hold a currency balance in a digital account that can be accessed using a user’s mobile phone. And the phone doesn’t have to be a Smart Phone since it is code based rather than using an interface.  Instead of having to make a long and expensive trip to a FINCA branch, this new service would allow clients – at no additional cost to them – to transfer their payments via mobile phone using a nearby Moncash agent.

The benefits to their clients were self-evident but the success of this program did not happen overnight. In 2015, less than 350 clients were paying their installments via Moncash. That’s when FINCA Haiti, with the support of Swiss Capacity Building Facility (SCBF), conducted a study to determine what needed to be done to improve the use of mobile banking. The study confirmed that 93% of FINCA Haiti clients had a mobile phone and a Digicel line, which confirmed that the platform had great potential to reach most of their clients. So, what were the barriers to adoption?

As with any new technology, one of the main obstacles to the uptake of Moncash had been the lack of appropriate training for both, FINCA credit officers and their clients. They needed to raise awareness about the program and make sure clients felt confident doing the transactions. They undertook hands-on practical training of the credit officers, and motivated them to train and encourage their clients. Thereby, they became champions of Moncash. FINCA also realized that the existing network of Moncash agents was limited in size and it didn’t cover the geographic area needed so they recruited and trained additional sub-agents and trained the existing ones to better serve the needs of their clients. “In addition, FINCA Haiti offered lines of credit to agents, allowing agents to better manage their liquidity and more reliably serve customers”. Lastly, they created better channels of communication with Digicel and resolved issues with the service more promptly.

After implementing these recommendations, the growth of loan repayments via Moncash has been impressive. While the number of FINCA clients has grown from approximately 35,000 in 2015 to nearly 47,000 in 2018; the use of mobile payments has gone from a start of 340 members in 2015 to a remarkable 15,241 to date.   Mobile loan disbursements have recently been rolled out.  Future changes in legislation with regards to the maximum transfer amount could allow this number to increase significantly.  That said, the 1,052 clients receiving loan disbursements to date has proven the success of this pilot project.  We look forward to watching this growth continue at the same time as we further our understanding of the broader impact of digital finance on Finca’s enterprising clients.

At Deetken Impact, our goal is to provide businesses with not only the financial resources they need to improve the living standards of the communities where they operate but also the technical assistance to make those changes sustainable. Key to this process is having strong relationships with organizations and businesses that are committed to the communities, that have deep understanding of their needs and have solid business plans to achieve their goals.

Earlier this year, Deetken Impact invested in Haiti for the first time through a USD 1 million loan to FINCA Haiti. Their plan is to expand their lending services to individuals, micro and small – and medium- sized businesses (MSMEs). With this investment they will grow their network of branches and digital financial services and build their capacity to develop customer-centric and gender-sensitive financial products.  Deetken Impact is working closely with them to support this ambitious plan.

The Bigger Picture for Haitians

As FINCA expands and continues to enroll more clients to do their loan payments and disbursements via Moncash, it is not only improving financial inclusion but is also helping to on-board more and more Haitians to the digital economy. They are overcoming barriers that have until now limited technology and finance to the domain of affluent citizens. 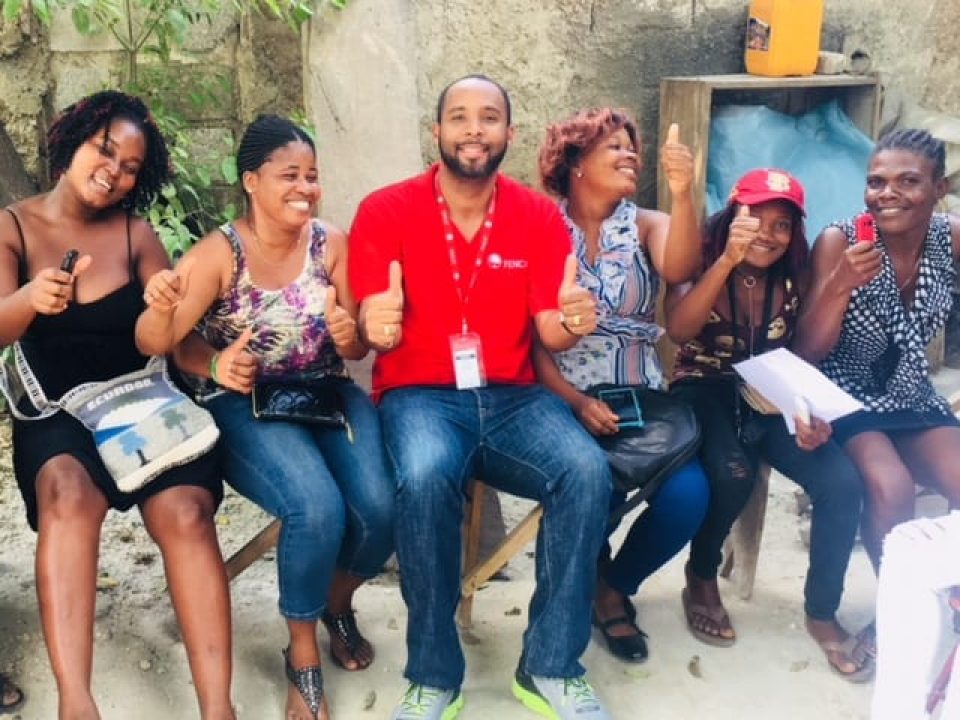 With their digital wallet usable for other types of transactions, it further reduces their need to carry cash.   They can buy food at local stores that also use MonCash; they can transfer funds electronically to suppliers that also use the service; and they can exchange cash at a nearby MonCash agent and have it applied to their digital wallet.  Access to their wallet requires verification of identity at the agent limiting the possibility of false access to their account. This has a compounding impact on their safety, cost savings, and time savings as they are now using less cash everywhere.

For the farmer in the Arbonite Valley it opens new opportunities as they cross the digital divide: using their phones to check weather, research plant conditions, find the best market prices, and use their digital wallets for transactions to sell their produce and buy supplies safely and securely. A true example of how access to credit, mobile technology and farming are jointly contributing towards sustainable economic growth in Haiti.

Montréal Massacre, 30 years later: My experience as a woman in engineering